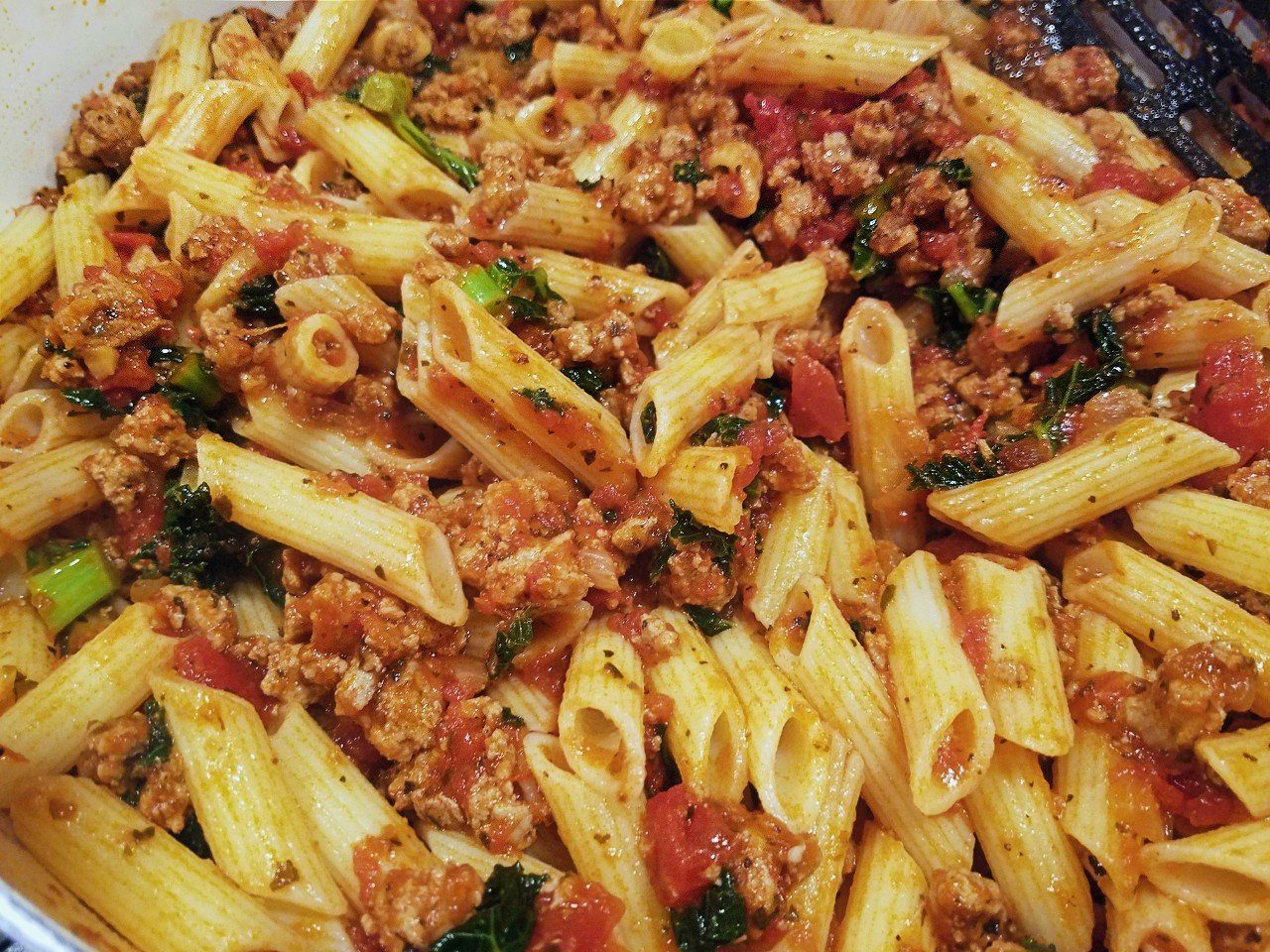 This week, I’ve got a ground turkey meat sauce with kale recipe for you that I literally threw together as I was preparing it. Sometimes, that’s the best way to cook–having no plan and just working with what ingredients you have. Although I will admit, sometimes, cooking by that method results in an epic fail. That’s just the nature of experimenting with new recipes. However, I can promise you that this recipe was not an epic fail!

Success or not, I say, embrace experimenting with your cooking! Especially during these times of social distancing when we can’t go out to the grocery store as often as usual. We can’t just pull out one of our favorite recipes, decide we’re going to make it, and drive out to the store to pick up any missing ingredients. No, we need to come up with creative ways to cook with the ingredients we already have.

So that’s what I did with this recipe. I wanted to make a meat sauce to eat with one of the many boxes of gluten-free pasta I have stockpiled, but my mom was also cooking soup at the same time. She had leftover kale, and I thought to myself: Hey, why not? Let’s make this dinner a little healthier!

I’ve talked before about how healthy kale is. It’s a superfood and for good reason. These green leaves are full of vitamins A, K, B6, and C, as well as calcium, potassium, copper, and manganese [1]. Throwing kale into any meal is an easy way to make it instantly more nutritious.

Here’s what the meat sauce looked like before adding kale to it. I mean, it still looks pretty good, if I do say so myself. But the coloring is a little one-dimensional, and I like to eat colorful foods. Cue the kale!

What a difference! It looks like a meal I put way more effort into than I actually did. It also looks much healthier! (Even though it wasn’t an unhealthy meal to begin with by substituting ground turkey for ground beef.)

My dad actually stopped by the stove on his way through the kitchen and said, “Whoa, whatcha making?” And my dad hates ground turkey. But I did get him to try it, and my mom liked it so much that I had to fight her off for leftovers the next day. (Just kidding, I’m nice and shared.)

There’s one last thing I want to share before I get into the ground turkey meat sauce recipe itself. It has to do with the ground turkey. While it is a leaner and therefore healthier protein, it has a bad rap for not tasting very, well, good if I’m being blunt. Since it’s lean, it can dry out easily during cooking, and it doesn’t have the same savory flavor of beef.

But I have a secret for keeping the turkey moist while cooking that has so far worked for me every time. Before cooking it, I shape the meat into a ball so it basically looks like a giant meatball. Then I break it up and toss it into my pan to cook. I’ve found that this helps the meat retain moisture and not remain stringy from being ground (which I think looks unappetizing, anyway).

Now, let me break down this recipe for ground turkey meat sauce with a twist for you so you can get to cookin’!

½ cup light shredded cheddar cheese (or mozzarella, if you prefer)

1 box gluten-free penne of choice (my favorite gluten-free pasta is Ronzoni–tastes almost identical to the real thing in my opinion!) *Side note: You probably won’t need a full box of pasta or the ratio will be a little uneven. I’d guess ½-¾ of a box is a good estimate.

1. Dice the onion. Add olive oil to a large pan and turn the stove on to medium heat.

2. Toss onions into the pan and cook for 2-3 minutes, stirring occasionally.

3. While the onions are cooking, get a pot of water boiling for your pasta. When ready, add pasta and cook according to package directions.

4. Squeeze turkey into a ball and then add to pan in chunks. Break up the turkey with a spatula or wooden spoon into small pieces. (Just like when you’re making tacos!) Cook until the turkey is browned and no pink remains.

5. Add a jar of spaghetti sauce and stir. Sprinkle in the chopped kale and fold into sauce. Then, toss in all the spices and stir well. Let it simmer while the pasta cooks, or for at least 10-15 minutes.

6. After draining the pasta, scoop it into the pan with the sauce and mix it all together. Like I said before, you probably won’t need a full box of pasta. I used probably between ½-¾ of a box. But add as much pasta to the sauce as needed to reach the ratio you’d like!

8. Serve up and bon appetit!

Here’s the final result: delicious yet healthy ground turkey meat sauce with kale and gluten-free penne! It is so flavorful and honestly tastes even better the second day. Save some for leftovers–if you can!

If you liked this recipe, be sure to check out some of my others for healthy dinner ideas. 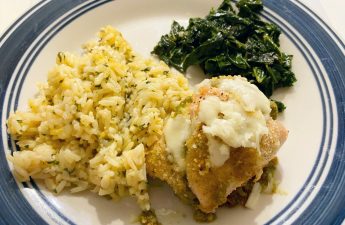 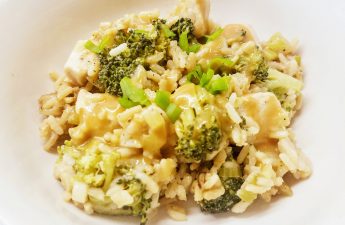 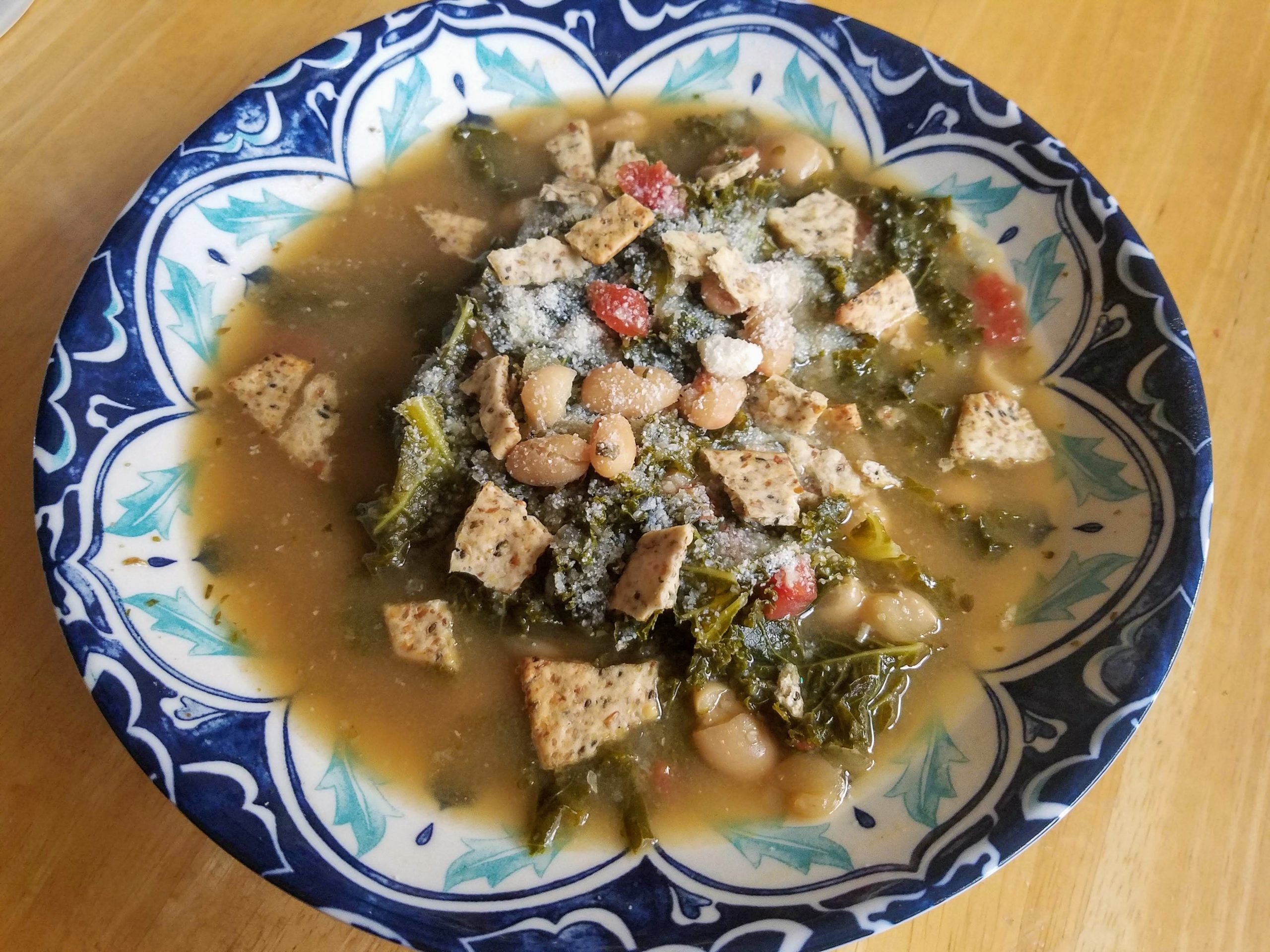